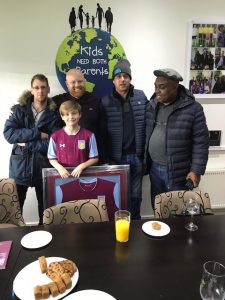 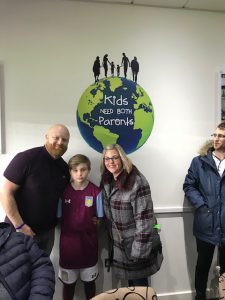 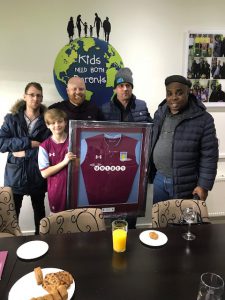 Oscar was chosen to be our mascot for the last game of the season after he and his family experienced something that no family should go through, 2 bereavements. Oscar has suffered 2 bereavements by the age of 10. His brothers, Ben and Jake both had a terminal illness called Sanfillippo syndrome and the life expectancy for this is early teens. Oscar suffered the loss of Jake 5 years ago (Jake was 12), it wasn’t the illness that took him, unfortunately he had a leaking heart valve and he passed away suddenly from a heart attack at the Acorns Childrens Hospice. He saw his brother Ben become worse over the years, as the illness progressed Ben lost his ability to swallow, was wheelchair bound, muscles became weaker and was continually getting infections, which is what happens in the latter stages of the disease. Ben was taken ill on January 2nd with pneumonia and was admitted to hospital and passed away shortly after at the Marie Curie hospice aged 20.

Stuart, Oscars Dad used to take his sons down the Villa and when Oscar was 4 he won the chance to be a mascot. However, when the time came Oscar felt unwell and couldn’t go through with it, no matter how much Stuart tried to persuade him. They thought that this might not happen again until Adelle, Oscar’s Auntie entered our competition! Oscar really enjoyed being a mascot at the Villa v Derby game on Saturday 28th April, despite it only being a draw (0-0).