We was supposed to be flying out to America this week to get Kian’s Stem cell treatment Saturday. Luckily we had the opportunity to bring it forward in February and I’m so pleased we did it sooner! Since we brought Kian home his been thriving. So many people have told us it’s like we brought a different child home from America. It’s a shame that governments care more about profits than human life as stem cell has been an absolute game changer for Kian! His specialist nurse told me in March, when they told us he was terminal in October they expected him to gradually get worse. By March they expected him to be blind, no speech, no muscle tone etc and that he wouldn’t see Christmas 2018. We have gone past March and Kian is better than his been for at least a year! I’m so grateful that our little solider showed us the true meaning of hope and fight and we didn’t give up looking for ways to help him. We are so grateful to everyone who has supported us, spent time looking at alternative therapies for us and helping us raise funds! Kian’s Army is the best Army in the world!
Where there is life there is hope
He Fights We Fight

Massive thank you to Kids Need Both Parents. This local charity have been amazing support. They arranged for Kian to be a flag bearer at the Villa game and on Boxing Day he was a mascot at the blues. On top of that he was in the program and his poster on the screen at half time. They also collected money at the game and afterwards and donated an amazing £2646.70!! We are so grateful for your support it means the world to us 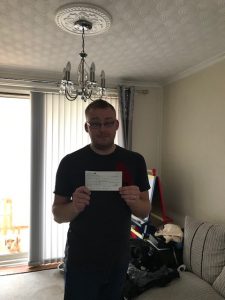 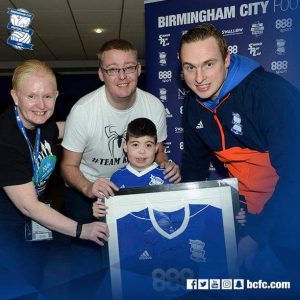 Last week we were able to present Kian’s family with a cheque for £2,646.70 to help pay towards his life-saving treatment. The money was collected from Birmingham City, Boldmere St Michaels Family Fun Day and from a Blues shirt that Cecil bought at an auction for £500 from the Jasper Carrot Suite. Thank you very much to everyone who contributed.