Kids Need Both Parents were outside the Kop Reception on Saturday 6th October with our Interview Shed for the Blue v Rotherham match.We had some special guests who came along and had a photograph and signed the Interview board for us. They included Geoff Horsefield (former player), Gary Gardner (current player) and Jaykae (Rapper). 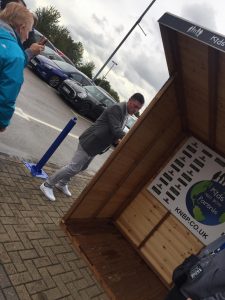 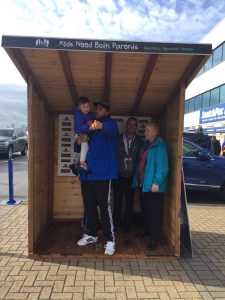 Kids Need Both Parents invited Hayley Elaine Gaines and her brother Luke along with Hayley’s daughter Lila Gaines to the Blues match against Rotherham. She was just 7 when her daddy suffered a stroke at the Blues vs Huddersfield match last year on 29th April 2017. He was rushed to heartlands from St Andrews but sadly the bleed on his brain was too severe and he died the following day. Lila has been so brave and a rock for her Mom and that is why Hayley nominated Lila for a VIP day out at the Blues. Hayley, Luke and Lila enjoyed a tour of the ground, Lila won a competition to lead the team out onto the pitch and #Team Gaines also won the quiz and got to award Lukas Jutkiewicz with a bottle of champagne for ‘Man of the Match’ after scoring his first hat-trick. Blues beat Rotherham 3-1. 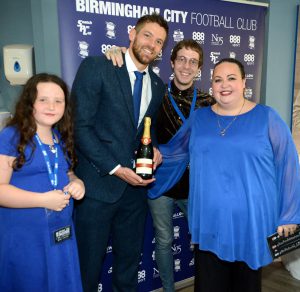