I wish to take the opportunity to reflect on the Charity Day we held on the 28th December at the Football Club in support of Charity Kids Need Both Parents.

The Charity had full use of the playing surface for a Family Fun Day, where I was asked to arrange a Football Tournament involving our Juniors for the morning session; this was to be followed by a match taking place between a Kids Need Both Parents XI v Wychall Wanderers Over 35s in the afternoon

The aim of the day was to raise money for a 7 year old lad called Kian who sadly has a life threatening condition that is causing inflammation on his brain. Kids Need Both Parents are trying to help Kian’s family raise £15,000 to fund life saving treatment. I’m delighted to say that this day helped to raise £500 towards this total. For those wanting to know more about the Charity and the work they are doing for Kian please see http://knbp.co.uk

A big thank you goes to all of the Coaches that gave up their time, helped set up the pitches and run teams on the day. Thank you to all the Players from our Under 9s, 10s and Wildcats for playing some fantastic football (and in great spirit too), and to the Parents of the children for supporting the day!

We split the players up from their usual teams in order to give the age groups and sexes the opportunity to integrate. Efforts were made to ensure there was a fair split of Under 9s, 10s and Wildcats in each team

Teams competed in 2 groups of 3 teams, with the top team from each group battling it out to be crowned tournament winners. Both groups were tight, but it was Paddy Hagans’ and Adrian Reeves’ Cougars and Arran Masters’ and Mark Johnson’s Leopards that topped their respective groups and competed in the Final

The Cougars had the better of the chances in the first half but it was the Leopards that took the lead midway through the 2nd half. The Cougars heads didn’t drop though and a last minute equaliser saw the Final go to penalties. Cougars held their nerve and claimed the title of tournament winners 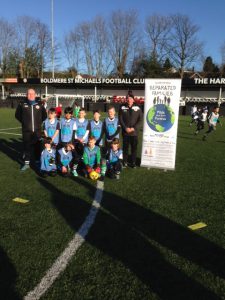 The adults match saw some some familiar Junior faces involved, with Rob ‘Statto’ Clarke taking to the Kids Need Both Parents Goal, myself at Left-Back and Dave Travers drafted in as a last minute secret weapon. Wychall Wanderers had a couple of secret weapons of their own in ex-professionals Maik Taylor and Stiliyan (Stan) Petrov. ‘Stan’ wasn’t due to play, but chose to appear after his flight was cancelled flight due to bad weather

The score finished 6-4 to Wychall with both teams scoring some fantastic goals; an exquisite lob over Statto from that man ‘Stan’ probably the pick of the bunch 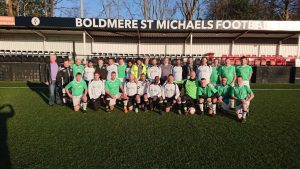 Personally it was an honour to be involved in the Charity’s Day, particularly in organising the Junior Tournament as it gave me the opportunity to witness football played by young players I wouldn’t normally get the opportunity to see. The tournament left me feeling impressed and extremely proud of how our players are developing, testament to what our coaches are teaching our youngsters!